September is when the season winds down and we head into the winter.  But not before the BDCA 100 which is the only real opportunity for northern based riders to ride a “fast” 100 without driving significant distances.  I set my 100 mile PB here in 2015 which has stood ever since, mainly due to the 2016 event being cancelled due to adverse weather.  So I was really looking forward to this and I was feeling much better this year after the 12 hour.  My preparation was all pretty much to plan – lots of tempo miles and a short taper.  And, beyond all my expectations, the weather was about as perfect as it can get in this country.  I’ve heard about these “float” type days but haven’t experienced many in the time I’ve been doing this.  It was warm without being too warm and there was next to no wind to speak of.

I’d put together a 10 mile split schedule to get me to around 3 hours and 40 minutes, although it was more in hope than in anticipation.  However, I felt really good on the first 20 miles out and found myself nearly 3 minutes up on target.  As I reached the turn at Blythe Bridge I realised that what little wind there was had been behind me (helping me up the “concrete mountain”) and was now in my face.  It wasn’t like a proper headwind but it took a slight edge off the really fast bit of the course.  By the halfway mark my gains had been reversed slightly and I was only about 90 seconds up.  The second 50 mile “lap” followed the same course as the first and I was happy that I managed to maintain my power until about 70 miles.  Between 70 and 90 miles I struggled and the wheels almost came off – metaphorically; thankfully they remained firmly attached to my bike!  My power dipped quite a lot and I was struggling with some undercarriage problems which didn’t help.  Time to MTFU!

I managed to get it all back together again in the last 10 miles but by the time I’d finished I’d put just about everything in that I could – it took a while afterwards before I stopped feeling sick and dizzy.  I was delighted to knock nearly 14 minutes off my PB with a new club record of 3 hours 38 minutes and 52 seconds.  I’d been chasing a club record all season so this meant a lot, especially after having thought I’d broken the 50 record only to find Alan had already beaten both the record and me.  I also appear to have qualified to get my name on the timetrialling forum all-time fastest list which is something I never imagined possible when I started this lark.  For 100 miles it is a list of riders who have gone under 3 hours and 40 minutes.  I realise that everyone is getting faster and I probably won’t be on there for long when the goalposts get shifted but again, it means something to me that I can say I managed it.  Subsequently, I also found out that I’d missed a VTTA National Age record by 1 minute and 10 seconds – again, doesn’t seem like much but totally unexpected to get that close so I’m very pleased with everything about this ride.  8th from 78 riders

In sharp contrast the weather had noticeably changed over the course of the week so that when I travelled down to South Wales the following Sunday it was very windy and very wet.  R25/3H is arguably the fastest 25M course in the country but not in a gale/monsoon – a fact reflected by the 60-odd DNSs.  Racing can be dangerous in extreme wind and rain, especially on DC courses, so people make their own decisions about riding or not and that is fair enough.  I decided to travel and ride despite knowing there was almost no chance of a really fast time or a PB, ultimately because I respect the commitment made by the organiser and the many volunteers to put the event on – and who were out in the same weather for much longer than I was.  Anyway, I parked next to a motorhome and the kind gentleman let me set up my turbo under the awning so at least I wasn’t soaked during my warm up.  The course itself was decent enough – there is a large downhill near the start known as the “bank”, which was very quick even into a headwind.  However with the swirling nature of the wind and the spray I ended up on the drops rather than stay in aero tuck (#wuss) and I was still 40mph+.  The rest of the outbound leg was a struggle into the wind but after the turn I was flying back.  Unfortunately the disadvantage incurred outbound far outweighed the tailwind back and I ended up with a time 90s off my PB.  On the positive side, I now know what the course is like so if I come back next year that will help.  By the time I got back to my car (nearly 6 additional miles up that bank I mentioned) I was like a drowned rat.  It took ages to get dry and change into fresh clothes and as I walked into the HQ to sign out and hand number 66 back I was stopped by doping control – but it was number 67 they needed.  Good to see them there though.   20th from 55 riders 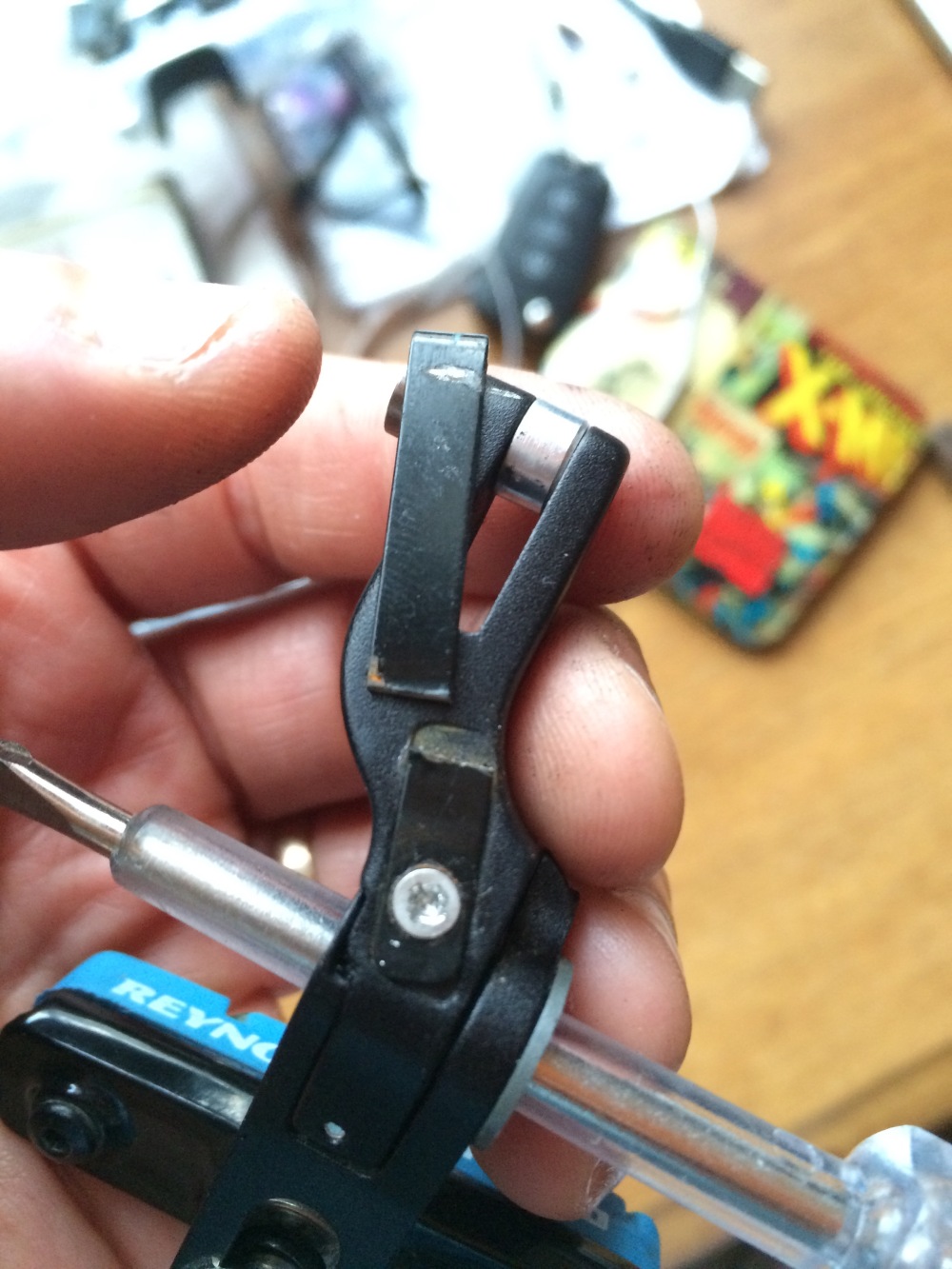 Experience has taught me that the tiny screw that holds it on is made of cream cheese and strips really easily so I contacted Canyon to order new calipers.  In the meantime I would revert to the solution I used first time around – namely a strip of souvenir Cyprus eraser cut to size to provide the “spring” back against the fork wall.  This is a known problem with the Speedmax front brake it seems – although that didn’t stop Canyon at first sending me replacement parts with half of them missing.

Sunday morning in the South Lakes was a lovely crisp morning, albeit a bit cold. There was limited wind and thankfully no rain.

I’d not ridden Levens for several years.  It’s a course I like – straight out and back, fairly quiet and fast on a good day, due in part to the gift hill at the start.  Before I ventured onto the V it was where I set my 10 mile PB.  The HQ was new to me – the bowling club in Levens Village which isn’t designed for 90 riders and their cars!  So I collected my number and parked up in the usual lay-by near to Sizergh Castle.  Once warmed up on the turbo it’s a short ride to the start.  I was very happy with my race overall – I managed a similar power output to the start of the season (which is unusual for me) and I knocked a whole second off my course best! 18th from 82 riders (£20, fastest 50+ age group)

My final TT of the season was the last race in the Cheshire Points series – the Stretford Wheelers 25.  It was due to take place on J2/9 but surprise surprise there were roadworks!  This season has been a complete nightmare for roadworks in the north west and it must have driven organisers to absolute distraction.  Instead it was run on the J4/8 course, which many people prefer, myself included. 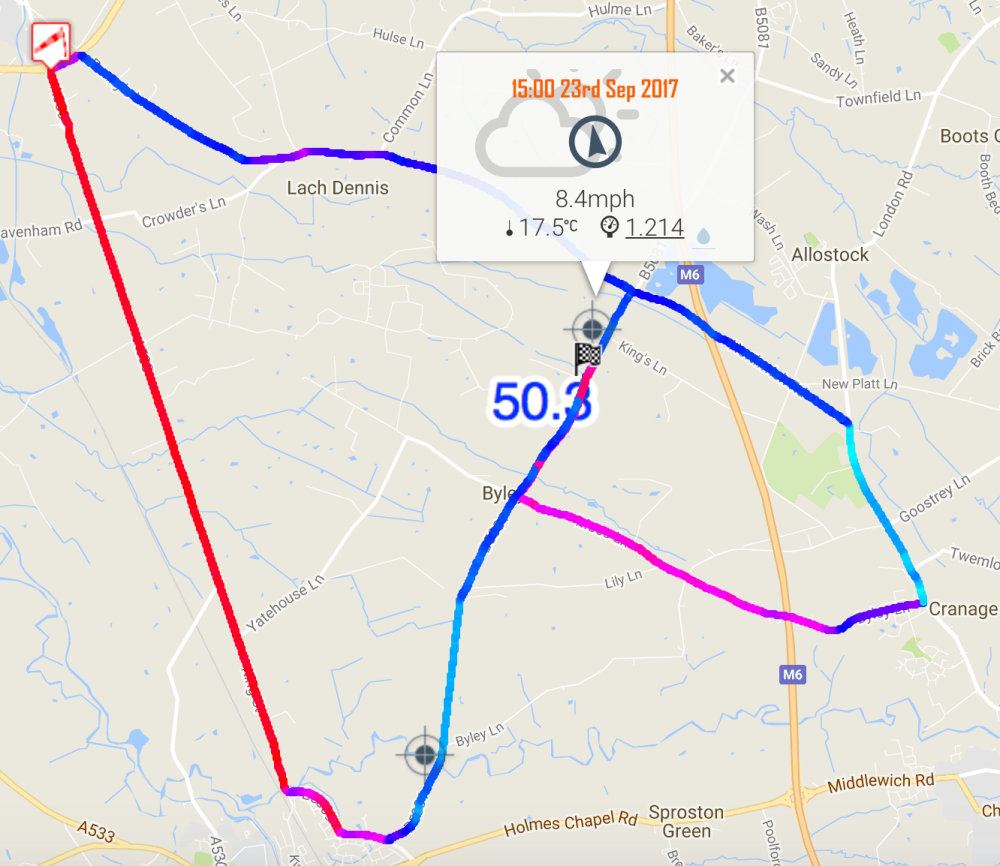 The weather was warm and mainly dry – the odd hint of damp in the air beforehand but nothing significant.  I was feeling really good and when I set off my power was great.  The first short loop saw the riders turn onto the A50 for a short distance and then left again onto Penny’s Lane.  As I turned I mistakenly hit the front shifter and my chain jumped off the big ring, missed the small ring and jammed between the bottom bracket and the chainring.  I stopped, freed it up and put the chain on the small ring and set off again.  The bloody thing then jumped off the other way as it wouldn’t shift up to the big ring and the chain ended up jammed between the big ring and the derailleur.  I stopped again, put it back on and set off again but that was basically my time gone.  I decided to make it a great training session instead and proceeded to try to smash myself.  A short delay onto the A535 and then again onto King Street confirmed it wasn’t my day.  I powered into the headwind still feeling great and then turned into Byley Lane to see where I would be after one lap.  Only to find a line of cars (and riders) queued behind a herd of cows running up the road.  Followed by a marshall in a hi-viz jacket!  I sat there behind them for a while with the other riders before the marshall turned from running and shouted to go past down the right hand side of the herd.  So I did, quite carefully though, as I didn’t fancy spooking running cows!  As I completed lap one my time was nearly 36 minutes – it had been a bit over 32 minutes the last time I rode this course.  The second lap was uneventful by comparison and I ended up crossing the line somewhere close to 4 minutes down on my previous time.

However, I was very happy with my form and power, and as that was my last race of the season I go into a break and then winter training with better form than I’ve ever had at the end of a season.  15th from 98 riders