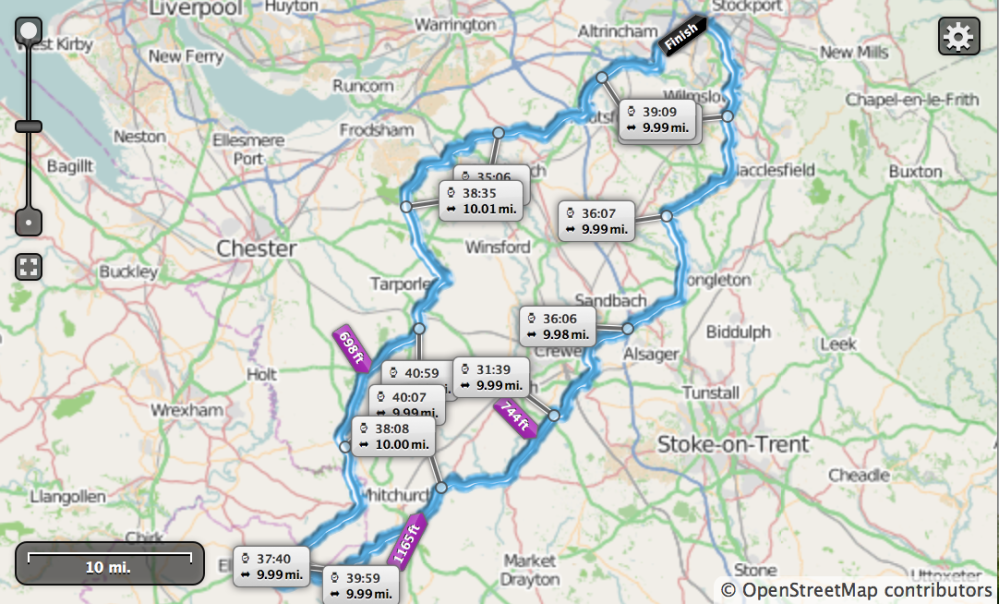 The weather forecast leading up to the Mere 200 had been one of biblical rain and gale forces south-westerly winds.  I prepared by packing my Carradice Barley with spare clothing, and fortified with a pre ride coffee at HQ, a very good turnout set out into the weather.

The rain was pretty constant on the ride down to the first control at Delamere, so by 30 miles my feet and hands were already wet.  On my feet I wore Sealskinz socks, Northwave Fahrenheit waterproof winter boots and Endura waterproof overshoes, none of which work when the water simply soaks down your legs and into them.  I was wearing Sealskinz gloves and find that these keep out the water longer than any others but eventually they do fail.  I had set off solo but had worked my way up the field until I caught Richard, on his first audax, Neil and GGary from the club, and then rode with them.  A quick energy bar at the control and we set off on the next leg to the halfway point.

The expectation was that the headwind would cause more problems than it did, especially in the last 5 miles to Ellesmere, but it wasn’t horrendous so that was something.  The roads were very dirty and messy and so we all ended up covered in detritus, but apart from Richard’s once white jacket, the frequent showers washed it away.  The halfway point at the garage meant a chance to refuel and then a turn with the wind at our backs, and only 12 miles to Raven cafe.  I changed gloves which was really nice and by the this time there were hints of blue sky.  Although there were large puddles on the roads, there were none of the floods of 2013 blocking our path.  A very heavy 10 minute shower ensured my gloves were wet again just before we got the cafe.

The raven allowed hot food and a change of many wet items, and then we set off on the return leg.  By the end I was feeling pretty weary – maybe a long time riding into the wind had taken it out of me.  I was glad to finish and eventually to get my now frozen feet out of wet socks and shoes.

Overall a good day and not quite as bad as the forecasters advertised!