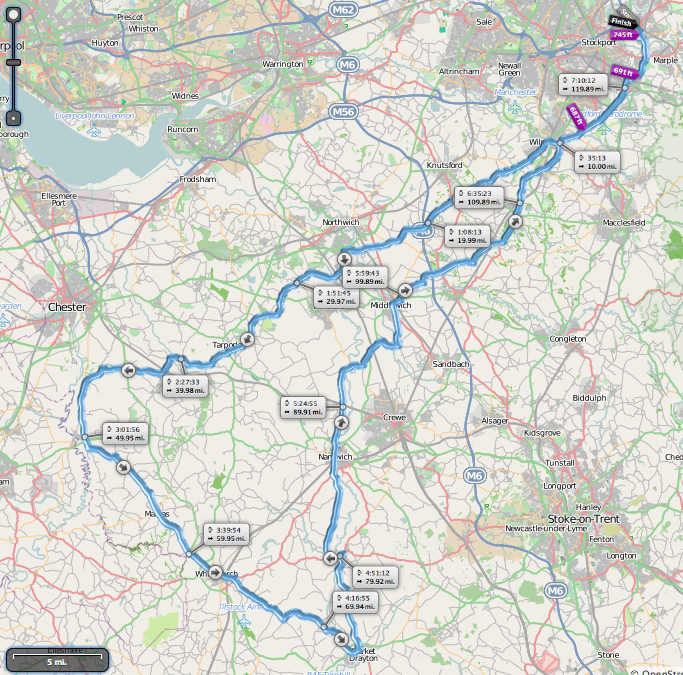 You know an audax could potentially be hardcore when part of the email you receive for it states “over the last 3 years we have had only 8 finishers, and several non-finishers ended up in A&E!”  But the weather forecast was good – and for the time of year relatively warm, so a record field of 60+ riders assembled at the start.  I met up with the guys from Saddleworth – Chris, Mike, Steve and Nephi – and off we went.  Chris said he wouldn’t be going fast as he had a cold – and then jumped on the front and pushed the pace hard.  The first 20 or so miles was fine as we rolled through Wilmslow and down towards Northwich.  However, as we crossed a particular main road I was riding along one handed taking a drink when the shout when up from the front about ice.  And then I noticed that the road was shimmering with black ice.  I carefully put the bottle back as all around riders were easing off.  In the distance I saw Steve come off but thankfully he was okay.  I had changed the Vittoria Randonneur Cross Pro 700×35 tyres to Schwalbe Durano 700×32’s to put more rubber on the ground, and I’m very glad I did.  The air temperature was a good 5 or 6 degrees so it was hard to understand how it was so icy.  The next 10 miles were pretty unenjoyable but then the sun came up and it seemed to disappear.

After the first stop at Old Ma’s for beans on toast, Chris, Mike and I pushed on really hard to get to Market Drayton.  You will see that switching my Garmin off at this point confused it – I did not fall off a cliff!

It was hard riding in parts as there was a slight headwind but we made very good time.  We were joined by Mike from VC167 as we headed back and again made very good time with the wind now behind us.  The aim was to minimise the amount of time we would be out in the dark (and therefore exposed to potential forsty roads).  We rode hard and made the final checkpoint at 98 miles in very quick time, catching organiser Mike by surprise.  We had lights on by now, and annoyingly at various points all of my 3 rear lights on the back of the bike went off at one time or another.

The air temperature held up nicely and apart from a pothole-induced puncture for Mike we completed the ride without further incident by 5-30pm – a fantastic days riding.