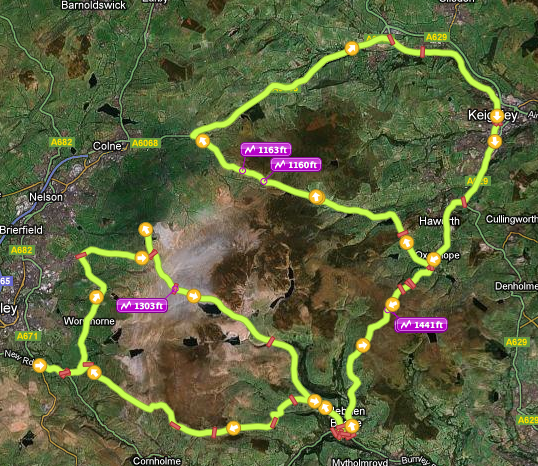 This is one of Chris Crossland’s permanent audaxes and we’ve been meaning to do it since Christmas!  As it turned out this was Anthony’s first ride since our last outing just after Christmas and perhaps it wasn’t such a good choice!

We set off at just after 9am having got ATM till receipts as proof of start and immediately we turned into the big climb up Heptonstall Road out of Hebden Bridge.

This is a long and steep road which eventually becomes cobbled, just in case you think it’s a bit easy (to the left is a picture of me in Cycling Active doing the same climb on Seasons of Mist.)  At the top the road was still partially icy and the mist/fog closed in making it pretty cold and damp.  I put my lights on to find that the batteries were flat which meant I was down to my emergency mini-light at the front.  The fog and ice made the descents particularly tricky so we were on the brakes most of the time.

First coffee stop was JJ’s diner, followed by a stiff climb back up onto the tops, time for another brew at the Corden Activity centre café, before dropping back down into Hebden Bridge for the second of the two loops.  I took the opportunity to buy some batteries for my front light and then we were off again, this time taking the long drag up the Keighley Road.  The fog was quite interesting, being a real pea-souper up the climb, but completely dissipating down the other side.

My legs were feeling pretty strong up the climbs so I was quite pleased.  Best joke of the ride talking about schitzophrenia – “I’m not schitzonphrenic.  And neither am I.” shows how addled your brain becomes when knackered.

A nice bowl of soup at the Scartop Balcony Tea rooms and an argument about the pronunciation of the word scone (I pronounce it like “stone” and Anthony pronounces it wrongly) were the other highlights of the remaining bits of the ride, apart from the final fast descent into Hebden Bridge as the sun was fast setting – brilliant stuff.  Great ride, great effort by Anthony with zero 2012 miles in his legs before today.  Onwards and upwards.