This ride takes it name from the start at Old Ma’s in Tattenhall, riding out to the highest waterfall in Wales, Pistyll Rhaeadr (which is pronounced Rhaeadr).  At 240ft high it is no Niagara Falls but is impressive enough up close 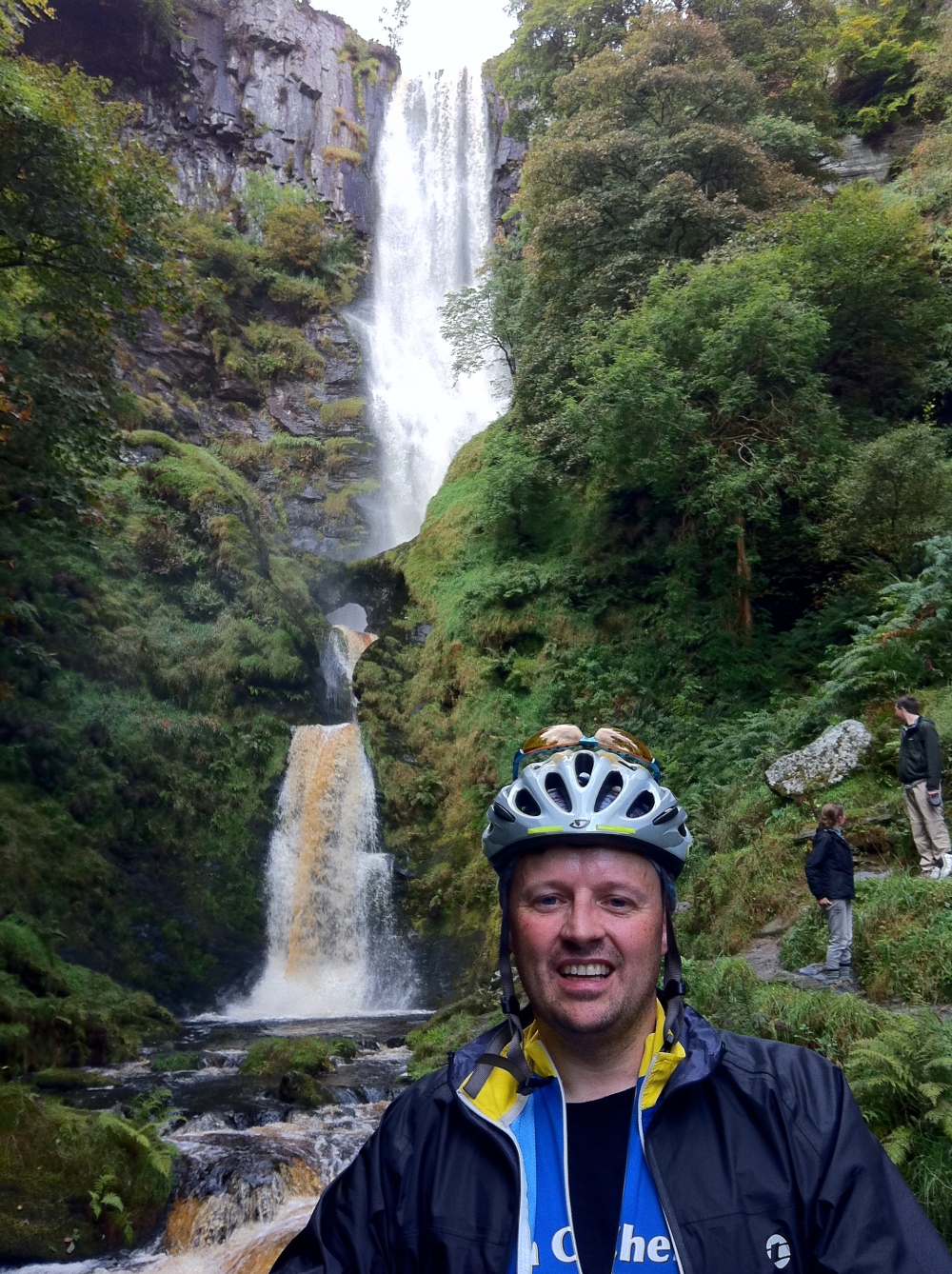 What wasn’t impressive was the £1.30 for a can of Diet Coke at the tearoom there, which nearly resulted in Anthony needing medical attention as it was his turn to pay – nearly eight quid for 2 scones and 2 cans!

This was a hard ride.  Right from the start the road felt like treacle and we seemed to be making slow progress.  There was a lot of climbing – 3AAA points worth – and it was a hard slog.

Anthony got his 3rd successive audax puncture and the weather was cold and wet, adding to our timing issues.  A visit to one of our popular haunts in Chirk saw us fortified with a large breakfast bap each.

As well as the general upness, the roads were not particularly good, or were full of debris washed out of the hedgerows by the occasionally heavy rain.

It’s fair to say the day was a challenge.

After the waterfall we had a bit of a downhill section so made better time, plus Anthony was much lighter having given all his money to the tearoom.  Of course it didn’t last as we did some more climbing.  Then some more.  And some more.  The roads were generally single tracks which we’d never have found ourselves, often riding through beautiful pine forests.  The hills were made more difficult by the surface and the fact that standing up on the pedals meant loss of traction and rear wheel slip.

Eventually we arrived at Bala and stopped at Caffi’r Cyfnod, which I think is Welsh for Caffi’r Cyfnod.  As we were entering one of the other audaxers came out, and in his broad Yorkshire accent declared that it wasn’t worth the wait as the queue was too long.  Anyway, we walked up to the deserted counter and were served straight away, with a much needed cup of hot coffee.

Later on we caught the mad Yorkshireman and found out he’d set off at midnight the night before to ride 140km to get to the start.  He was tired by now and didn’t want to finish the 206km audax and then ride 140km home.  Unfortunately he couldn’t find a lift back to Yorkshire, so I assume he did ride it in the end.  Or he’s still out there now.

We were getting worried now as we were losing the light and neither of us had what I would call “countryside” lights.  A quick stop for soup and soon we were back into Cheshire and it was time for the now traditional “last 10” time trial back to base, which Anthony loves.  In pitch black we averaged the last 10 in 18.1mph – which I think is pretty impressive given we’d done 120 miles and nearly 9000ft of climbing at that point.