The mind is both a wonderful thing and a terrible thing.  During last weeks Bowland Forest audax my mind had convinced me that I was struggling more on the hills, that I was not as fast and that I was more tired.  One of the advantages of being a data geek like me is that you can actually take a subjective view like that and use some data to analyse it.  So I did.  Up until the end of May last year I did 2,428 miles and 94,659ft of climbing.  Using a not-really-very-scientific-formula, that works out at around 39ft of climb per mile ridden.  The equivalent period this year sees me having done 3,146 miles and 101,729ft of climbing – or around 32ft per mile.  That would tally with me focusing more on quicker rides than hilly rides.  But there’s not much in it – certainly not enough to worry about.

But me being me I decided to do a few hills this weekend.  I warmed up on Saturday with a quick 32 miler including The Rake – which you can find on page 126 of the excellent 100 Greatest Cycling Climbs book by Simon Warren.

Can you spot The Rake?

The weather was grey and overcast with wet roads but little or no rain.  The surface of The Rake is broken and difficult at the best of times but it was glistening with the wet, rainbow spectrum of spilt petrol/diesel/oil.  Picking a line was difficult, with my bike wheel spinning on occasion and I reached the top with a higher heart-rate than I expected and feeling it in my legs.  I must have been right, I thought, I’ve not done enough hills.  But on analysis of the data I found that the probable reason was that I had gone up the hill about 1mph faster than my previous two rides on this loop.  That doesn’t sound much but over a mile of climbing including 20%+ gradients it’s enough!  And overall I knocked 5 minutes off my previous best time for the ride.

Today I decided to go north again but heading over to Hebden Bridge – which if you like flat riding would be your version of cycling hell. 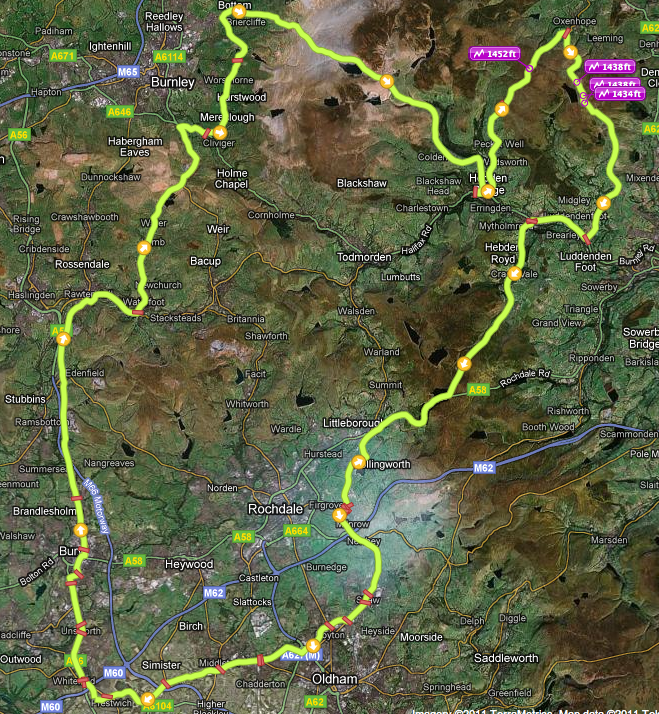 There was a stiff wind this morning and the route took in a mixture of short, sharp climbs, like Widdop, and long gradual climbs, like Cragg Vale.  Something for everyone!

Anyway, my legs felt very heavy today.  My time and average speed wasn’t particularly good.  I’ve noticed some riders who struggle to maintain a pace in a group but post some fantastic averages when out on their own.  I’m the complete opposite.  I need company to motivate me to go faster – on my own I just settle for “comfortable”.

Overall though I’m pleased with the rides, and I think it shows the value of recording data so you can test your subjective thinking and get to the real story.